When a woman experiences chronic discharge or istihada, it can be difficult to keep performing wudu. If the flow of discharge or istihada is continuous to the extent that she cannot make wudu and complete the salat in the duration of an entire prayer time, without the impurity exiting, she may fall into the category of the excused person (ma’dhur).

The practical benefit of qualifying as a ma’dhur is that she will make one ablution at the beginning of every prayer time with which she can carry out any act of worship for the duration of that respective salat time. At the end of the prayer her wudu is nullified and she will renew for the next salat time.

The Fiqh of It

The  laws governing the ma’dhur can often be complex and difficult to understand. Using the analogy of  “An Excused Person’s Club” can make it easier to make sense of the rulings.

To join the club, a person must have a chronic issue that nullifies wudu. This “excuse” must remain present for one complete prayer time, such that a person is not able to perform the four fard acts of wudu and a fard salat without its occurrence.  If the excuse starts in the middle or end of a prayer time, she will delay her prayer until the end of the prayer time. If the condition continues, she must perform wudu and pray her salat. In the next salat time, if the excuse continues as described above for the entire duration of the prayer time, she will qualify as a ma’dhur. Her previous prayer, which she offered with impurity, will be valid.
However, if the excuse does not last for the entire salat time, she has failed to meet the membership requirements and will not qualify as a ma’dhur.  She must repeat the previous salat as she prayed with an impurity that was not excused.

Ayesha starts experiencing istihada mid way through Zuhr salat. She delays her prayer, until the end of the salat time waiting for the blood to stop.

What should Ayesha do?

If the istihada does not stop, and the time for Zuhr salat is about to end, Ayesha will perform the fard acts of wudu and pray the fard. At this stage, she does not know whether her salat was valid or not. If her istihada stops at any point before the end of Asr salat, she will not be considered a ma’dhur and she will need to repeat her Zuhr prayer.

However, if the istihada continues throughout the entire time for Asr salat, her excuse will be established and she will be considered a ma’dhur. Hence, her Zuhr prayer will be valid.

Once the excuse has been established, the conditions are not as stringent. To remain in the ma’dhur club, the excuse need only occur once in each subsequent prayer time.

3. Who is “Disqualified from the Club”

When a complete salat time passes without the excuse occurring even once, she will be disqualified from the ma’dhur club.  It should be noted that her membership is cancelled from the last time she saw the excused impurity. This may result in the need to perform qada salat retrospectively, if she had continued to offer salat without renewing wudu.

Zahra is suffering from istihada and has qualified as a member of the ma’dhur club. She performs wudu during Zuhr time and while she is performing salat her bleeding stops. It does not reoccur for the remainder of Zuhr or at any point during Asr.

What should Zahra do?

Zahra is no longer able to pray with the excuse and her membership was terminated at the time the bleeding stopped. Retrospectively, her Zuhr salat must be repeated as it was performed without a valid wudu. Had the blood returned during Asr, there would be no need for her to repeat the prayer as she would remain a member of the ma’dhur club. 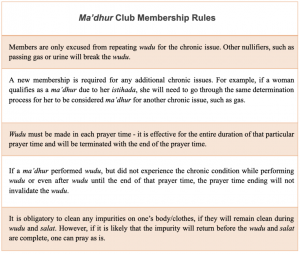 4. What Invalidates Wudu of a Ma’dhur?

Wudu performed at the beginning of prayer time will only be invalidated by:

If wudu is made for another reason, such as passing gas, and the chronic ailment starts after, this wudu will break even though the salat time has not ended. This is because it was not made to purify against the excuse.

If wudu is made due to some other reason, and the excuse does not return, this wudu will not break with the ending of the salat time. This is because she is in a state of complete purity and nothing has occurred to break it.

There is no prescribed prayer time between sunrise and noon; rulings for chronic annulment of wudu during this time are contingent on one’s status at the end of Zuhr.

Is My Nifas Done

Taking the Pill for Hajj & ‘Umrah